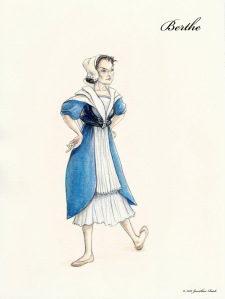 Berthe and Wilfrid are like inverse mirrors of each other. As Giselle’s mother Berthe is overprotective and judgmental which stems from her perception of her finances, increasing age, disillusionment with the glamour of life, and bitterness as it unfolded in a manner that she didn’t expect. Her costume is based on a daffodil and Lorimer’s original design for Giselle, which I mistook for Berthe’s design when I first saw it. The wimple and longer sleeve suggest an experience when the culture was older and more conservative. Norma Desmond was part of the influence for her character. Beaumont posited that her family was once wealthy and somewhat noble but fell on hard times, when that is coupled with the death or disappearance of her husband she is left poor and with few options for security other than Giselle marrying well. Berthe was once very glamorous and desired but her circumstances have made her inner beauty dim.