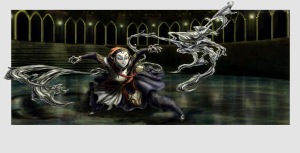 The smallest and fiercest of the Marlequin guard, she lacks strength but possesses speed and agility in abundance. Drosselmeier gave her the knowledge and tools to be a mechanic/doctor for the Marlequins, as well as a most curious weapon. She carries a canteen of liquid she steel that she polarizes into whips and weapons at will. The canteen it is a singular feat of creation accomplished but studying the Tea people and mimicking their abilities, it also possesses an enhanced range of control. She merciless, a master of analysis physics estimation using her size, speed, and momentum dictate her battles and eviscerate her foes.